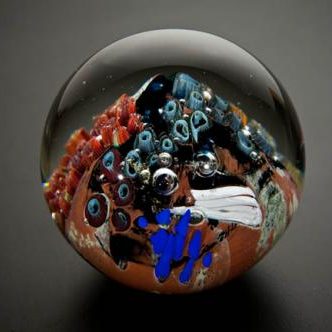 Josh Simpson’s career began in 1972, when he was a senior at Hamilton College. At the time, seniors were permitted to pursue their own interests during the month of January, so he spent that period practicing glass blowing in Vermont. Simpson became so enamored of working with glass that a month became a year, and while he did return to Hamilton briefly to complete his psychology degree, he has been pursuing this passion ever since. He is particularly well known for his planets, glass paperweights ranging in size from about an inch in diameter to the 107-pound Megaplanet the Corning Museum of Glass commissioned in 2005. He originally began making planets in the mid-1970s, when he was trying to capture the interest of eighth-graders during glass blowing demonstrations. Inspired by the story of the Apollo astronauts seeing the earth hanging in space like a blue marble, he began creating marble-sized planets for the students.