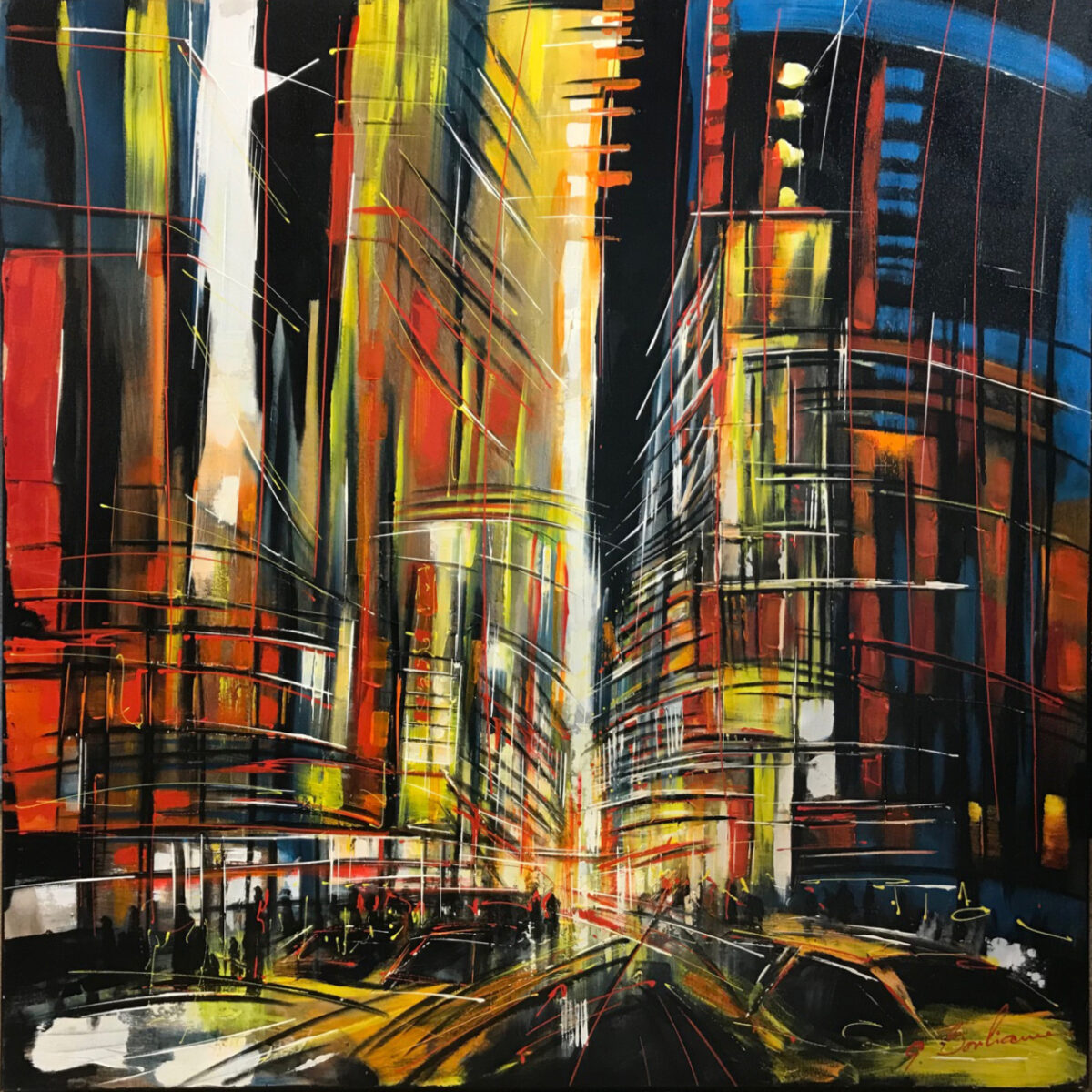 Born in Saguenay, Quebec, Gisèle Boulianne currently lives near Quebec City and successfully runs her own art gallery in the Old Port of Quebec.

To increase her knowledge and gain insights into new professional pathways, Gisèle completed a bachelor’s degree in visual arts at University Laval in 2006. During the university’s graduation visual arts exhibition, Gisèle, with her degree fresh in hand, was awarded the second audience award. In 1977, she completed a professional degree program in advertising design. She was then awarded First Student Award by the Quebec Association for academic management (AQCS) and offered a graphics designer position with Quebec City’s newspaper, Le Journal.

After completing a bachelor’s degree in plastic arts education in 1984, Gisèle established a private school that remained open until 2007. In 2005, she received an Honorable Mention from the jury at the Montreal Festival of the Arts (FIMA).

Invited to the Monastir International Festival of Plastic Arts in Tunisia as a guest of honor during the summer of 2008, Gisèle received the First Award for Excellence by the Tunisian governor. In 2009, she was nominated as a permanent jury member. Recently, she has participated at the Salon national des Beaux-Arts at the Louvre in Paris.

As a member of the Quebec professional Visual Arts Group Association (RAAV), Gisèle’s art work can be found among various collections throughout the world such as in Canada and in Europe. Among the many businesses and institutions that collect Gisèle’s art are Portneuf’s Public Health Care Institution (CIUSSS) and School Board, Quebec Transport Commission, Emco Building Products, Aluminerie Alcoa, Toyota, and Norton Rose. Gisele’s art work maintains international status by being available for sale via various art galleries located in Toronto, New York, Puerto Rico, Portland (OR), Monastir (Tunisia), Montreux (Switzerland), Paris, Nice in France, and Dubai in the Emirates.

Gisèle knows how to express the abundance of life that surrounds her by transcending what she feels into vibrant, intimate, and creative art work. Her artistic approach is almost theatrical where an ongoing storyline engages the imagination of the spectators without offering a conclusion, a never-ending story. The overlapping complexity of color, the vigorous line strokes, and the intermixed shapes conjures up the crazy urge to create a dramatic play which she represents as a fuzzy scenery radiating from her environment. Gisèle paints urban life by being fully immersed in her surroundings.

Always keeping abreast of current developments and styles, it is perfectly normal for Gisèle to use photography, collages, and new technologies offering a three-dimensional view. She also uses unconventional materials such as aluminum and LED lighting that when mounted behind cutouts in canvas creates a vibrant composition. The lines, shapes, colors, and textures generate a whirlwind of energy that is striking for the viewer. 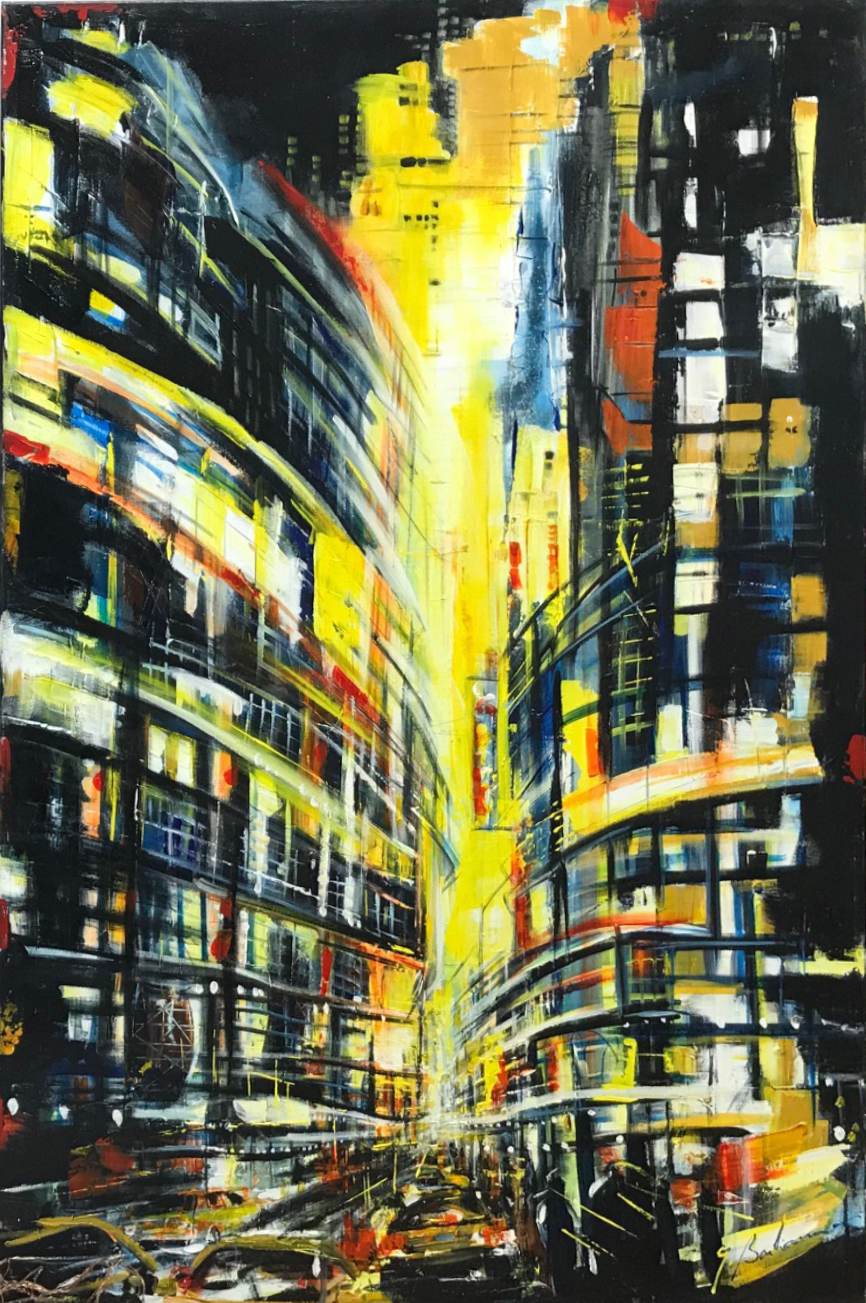 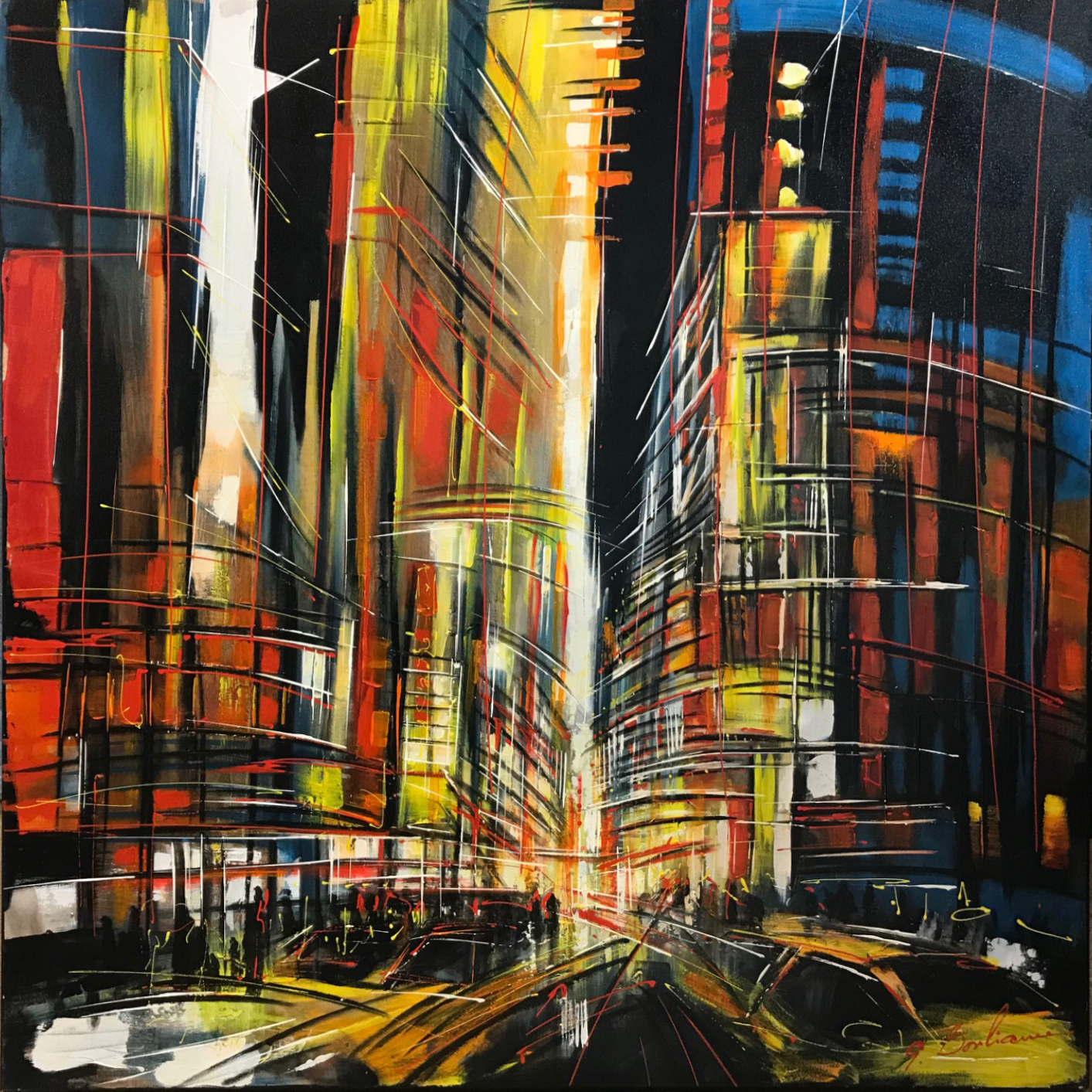